At the end of March, amid absolutely no signs of trouble whatsover in “the data” – and after the establishment excoriated the “neanderthal thinking” of several red states for ‘prematurely’ and ‘recklessly’ lifting their COVID restrictions, freshly-appointed CDC Director Rochelle Walensky went “off-script” (though if one watches here eyes it appears she is very much reading a script) to warn the public about her “impending doom” following a very modest rise in COVID cases and hospitalizations.

Fauci doubled-down with the doom finger-pointing…

“I think the reason we’re seeing this plateauing and the increase that I hope doesn’t turn into a surge is because we are really doing things prematurely right now with regard to opening up.”

At the time we pointed out that Walensky’s level of fearmongering is disgusting and disingenuous and the American people are growing more and more insensitive to such evocations.

Now, just 6 weeks later, as all the doomsaying, fearmongering, panic-inducing double-speak was proven completely misplaced, and amid political pressure from even the leftest of leftists to “do something”, the masks are off and freedom (for the vaccinated) is offered back to ‘we, the people’.

Just two weeks after announcing a mask revision on April 27 to allow people who are fully vaccinated to do most things outdoors, with some precautions – again amid political pressure from an increasingly confused American public –  CDC announced it revised its mask guidance again, now enabling those who are fully vaccinated to forgo wearing masks both indoors and outdoors.

“Anyone who is fully vaccinated can participate in indoor and outdoor activities — large or small — without wearing a mask or physically distancing,” said Walensky.

“Based on the continuing downward trajectory of cases, the scientific data on the performance of our vaccines and our understanding of how the virus spreads, that moment has come for those who are fully vaccinated,” she continued.

Join me here for exclusive videos that are cannot be aired elsewhere: http://www.peggyhall.tv

Waiter, I said I didn’t want the Fauci baloney with Birx pickles and Redfield mustard and the RNA sauce.

The lockdown-vaccine lunatics have a problem. They’re running out of credible front figures.

Fauci says asymptomatic COVID-19 cases can’t drive an epidemic, and never have, which means most PCR positives are meaningless, and lockdowns are unnecessary. Then he turns around and says we all have to wear masks until the sun burns out.

He says running the PCR test at more than 35 cycles gives a meaningless result, but the FDA and the CDC advise deploying 40 cycles. Fauci makes no judgment about THAT.

He says the experimental COVID vaccine is using RNA technology for the first time in history and we’re all guinea pigs; and then he says the vaccine is absolutely safe and effective.

Biden can’t find his way from the shower to his bedroom without three minders, but he’s “following the science.” His handlers are postponing the State of the Union until he resigns his office owing to health concerns, so KamALA can deliver the address and spell out the new normal.

Bill Gates keeps pouring his Foundation money into Big Pharma. These donations push up the share prices of the companies, in which he happens to hold said shares. Ordinarily, this would be called some kind of insider trading or money laundering. The perps usually go to prison.

Credible TV star news anchors? Don’t be silly. Lester Holt is a human cadaver. The other two—David Muir and Norah O’Donnell—are a Sears underwear model and an ex PR flack. Taken together, their gravitas approaches Roger Corman’s Monster from the Ocean Floor. “COVID is coming!”

The Vatican? Apparently the Pope believes Jesus urged the founding of the Roman Church so everyone could take the COVID shot in the arm. Wafer, wine, Pfizer.

Cuomo and Newsom, the American bookend lockdown governors? Cuomo’s own Party is doing a Harvey Weinstein Lite on him. The California recall petition against Newsom has gathered 2 million signatures so far.

Angela Merkel, the chancellor of Germany, in case you missed it (US major media underreporting), has refused to take the AstraZeneca jab in the arm. She states it is only approved in Germany for people 65 and under. She’s 66. Very precise of her.

US media reports: black Americans, hospital personnel, and soldiers are refusing the jab in droves.

Source: COVID Vaccines are NOT Safe and Effective

written by adam dick
thursday may 13, 2021
This week, some state and local governments in America are expected to begin working with the United States government on giving shots of Pfizer-BioNTech’s experimental coronavirus “vaccine” to 12 to 15 years old children. This shot-giving will supplement the major push for giving experimental coronavirus shots, made by several manufacturers, to Americans 16 and older that has been going on for several months.

Will some state and local governments refuse to participate in this expansion of the program? If they support children’s health, they should say no.

The younger people are, the less risk of serious injury or death coronavirus tends to pose. Children face very low risk of such harm. Yet, children do appear to face significant risk of harm from experimental coronavirus vaccines.

Politicians and people in the media say repeatedly, in an effort to encourage everyone to take the shots, that the shots are “safe.” But, the fact is the US government and drug companies have admitted in the experimental vaccines’ fact sheets that the shots carry significant known health risks as well as, especially given rushed and incomplete testing, additional unknown potential health risks. Indeed, reports of deaths and other adverse events among people 16 and over who have taken experimental coronavirus vaccines are so plentiful they are off the chart in comparison with such reports about all other vaccines combined.

It is one thing to stand aside as parents choose to have their children injected with experimental shots that carry significant known health risks and unknown potential negative consequences. It is another to actively encourage the giving of such shots through participating in their promotion and distribution. At some point, shouldn’t state and local governments admit that the risk and rewards related to shots are so out of whack that their taking part in pushing the shot-giving is a clear menace? Being presented with the opportunity to give experimental coronavirus vaccine shots to 12 to 15 years old children seems like a good time to declare “no more.”

Copyright © 2021 by RonPaul Institute. Permission to reprint in whole or in part is gladly granted, provided full credit and a live link are given.
Please donate to the Ron Paul Institute
Related

Source: State and Local Governments Should Refuse to Participate in Providing Experimental Coronavirus Vaccines to Children

IS COVID-19 A BIO-WEAPON? The origins of #Covid19 are becoming increasingly clear, and Dr. Richard Fleming, cardiologist and researcher walks Del through a shocking paper trail surrounding the SARS-CoV2 virus and its link to Tony Fauci and US funded gain-of-function research. Be sure to see Dr. Fleming’s website with extensive documentation: https://www.flemingmethod.com/documentation .

May 6, 2021 ‘Tucker Carlson Tonight’ host takes a look at the potential risks that come with taking vaccines

Source: Tucker: How many Americans have died after taking COVID vaccines?

DO NOT MISS THE #UNRIG TRUTH TOUR! https://bigbatusa.org 15 May to 6 September — EPIC!

Source: The Disconnect Between What People Say and What They Do

The country is experiencing its largest coronavirus outbreak after vaccinating some 60% of its population, mostly with China’s Sinopharm shot. 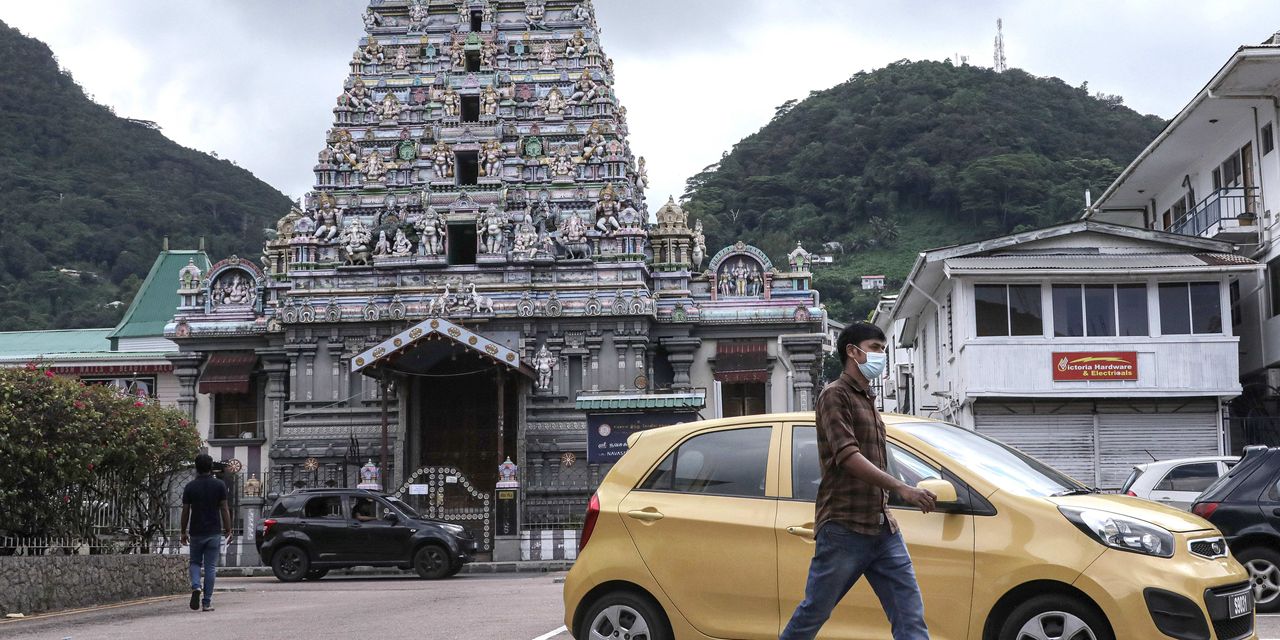 Seychelles, which has vaccinated a higher proportion of its population against coronavirus than any other country, is struggling to contain a new surge in Covid-19 infections, raising questions about the effectiveness of a Chinese shot the island nation has administered to the majority of its vaccinated residents.

In recent days, a rush of patients seeking treatment has overwhelmed the Seychelles’s sole coronavirus treatment center, as the pristine archipelago of 115 islands in the Indian Ocean battles its worst wave of infections, according to the health ministry. The daily rate of Covid-19 symptomatic infections has jumped to more than 300 cases, bringing the cumulative total to 8,172 and forcing the government to reinstitute lockdown measures.

Although that number is low, it is an outsize problem for a tiny geographically isolated nation with a population of just 100,000. The daily case rate is a higher number of infections per capita than India’s outbreak.

On Sunday, with hospitals in the capital Victoria overwhelmed with patients, the health ministry issued guidelines on how people who have tested positive for Covid-19 should treat themselves from home while the government scrambles to build more makeshift treatment centers.

The islands’ renewed infection surge comes as a shock after the government vaccinated more than 60% of the population. Some 38,000 of the population was given the shot from Chinese state-owned firm Sinopharm and the remainder received AstraZeneca shots produced at the Serum Institute of India.

TO READ THE FULL STORY