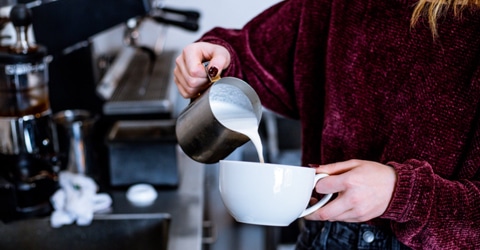 If you could reduce your relative risk of breast cancer by 80 percent, wouldn’t you do it? A new study claims that women who drink cows’ milk could increase their risk of developing breast cancer by up to 80 percent compared to women who drink soy milk. Unbiased by either soy or dairy industry funding, this research was commissioned by the National Cancer Institute at the National Institutes of Health and the World Cancer Research Fund. Here is what you need to know.

The study was based on 52,795 adult women participants over the course of seven years. Participants were intentionally taken from the Adventist Health Study-2, as many Adventists follow a vegetarian diet and tend to consume significant amounts of soy in comparison to the Standard American Diet. All participants filled out a detailed food questionnaire upon enrollment and a small cohort was selected to provide further 24-hour food recalls and urine samples over the course of the study to ensure accuracy. At the conclusion of the study, 1,057 participants had developed breast cancer.

How Much Milk Increases Your Risk

Through further analysis, the researchers found a dramatic increase in risk with as little as a ¼-⅓ cup margin. Women who reported drinking just eight ounces a day increased their risk of breast cancer by 50 percent, and those who consumed two to three glasses of cows’ milk escalated their risk by up to 80 percent (in comparison to the women who did not drink any cows’ milk). To clarify, drinking one cup of cows’ milk per day does not guarantee a woman is 50 percent more likely to get breast cancer. It does, however, suggest that her individual risk increases by 50 percent. So, if a person has an inherent 12 percent risk (the average), she can increase that risk by half simply by sipping one cows’ milk latte or dairy-based smoothie a day. In contrast, participants who completely avoided cows’ milk but consumed soy milk did not show an increased risk of cancer.