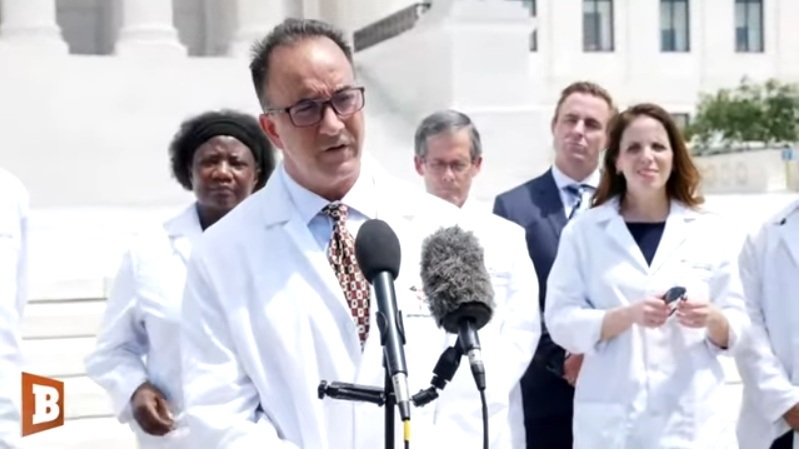 Less than 24 hours after the Frontline Doctors first press conference in Washington D.C. was censored and removed from Facebook, YouTube, and Twitter, and after having their own website knocked offline in an attempt to silence them, the doctors were back in front of the steps of the Supreme Court building today (Tuesday, July 28, 2020) for their second press conference, at great risk to their lives, their families, and their jobs, as they remained determined to bring the truth directly to the American people that a cure for COVID exists, and that the public does not need to cower in fear anymore.

While the corporate media continues to blacklist the group of doctors and refuses to cover their press conferences, some hecklers showed up to try and drown out the speakers.

The fact that these doctors are seeing a 100% cure rate for COVID patients is a message Big Pharma, Big Tech, and their political leaders do not want the public to hear. Because it would mean that their drugs and their coming vaccines are worthless and unnecessary.

They do not want healthy Americans. They want sick Americans cowering in fear so they can control us for their own purposes.

Dr. Simone Gold was the first doctor to speak today, and she said:

We are finally coming forward, at great personal and professional costs to ourselves.

We’re tired of seeing patients die in front of us, and we’re even more upset to see the spider web of fear that is enveloping the American public.

When there’s a treatment, there’s a cure. People have been afraid to say that.

But what else do you call it if you give somebody the medication early, and it aborts the disease process?

We won’t be silenced. The First Amendment is first for a reason. There’s thousands of us.

Dr. Richard Erso was another doctor who spoke today:

We cannot let our patients die without treatment. And that’s the major thing that’s happened.

We’ve been told to hide in our houses, wear a mask, and wait for a vaccine.

Hydroxychloroquine works. Withholding it from patients is shameful.

Watch the full press conference as filmed by Breitbart News (click on Brietbart News link first and the Health Impact News site if that fails).

Article continued on the HIN site: