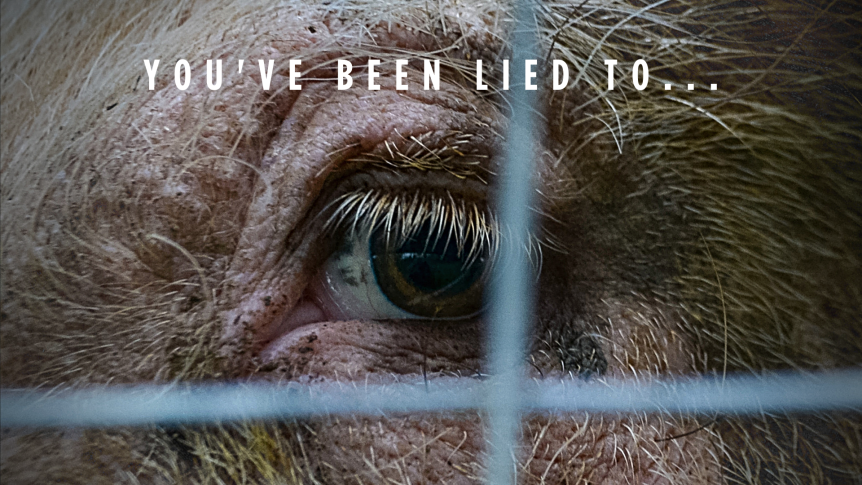 HOGWOOD: a modern horror story will be available to watch on Amazon Prime Video, Apple TV and Google Play Movies from 25 June 2020. HOGWOOD has been selected for the British Documentary Film Festival.

Conspiracy theories are everywhere but the documentary HOGWOOD: a modern horror story reveals a real and shocking home-grown conspiracy. Streaming on Amazon Prime, Apple TV and Google Play Movies, the 35-minute indie documentary follows an intrepid group of undercover investigators as they enter the UK’s biggest factory farms. The conspiracy unfolds as they fight against some of the most powerful players in the animal agriculture industry, delicately weaving a chilling tale of negligence and greed.

Narrated by Jerome Flynn, best known for his role as Bronn in HBO’s Game of Thrones, the documentary centres around the quaintly named Hogwood farm. Jerome opens the documentary against the picturesque backdrop of rural England, just minutes away from the farm. He tells the disturbing tale of Hogwood and how it came to be one of the most infamous pig farms in the UK. His narrative is intertwined with undercover footage and interviews with investigators and activists representing the animal welfare group Viva! — who conducted the campaign.

The film goes onto feature interviews with a livestock vet speaking out about her horrific on-the-job experiences in similar farms for the first time. It concludes with expert comment from GP and public health expert, Dr Josh Cullimore, and Oxford University researcher Joseph Poore. The release of HOGWOOD could not be timelier, given that the current COVID-19 pandemic came from the consumption and exploitation of animals. It paints a bleak picture of how meat pollutes our planet and puts us at risk of further disease pandemics, highlighting the catastrophic impact if we do not reduce our meat and dairy consumption. This truly is a film for now.

“Three quarters of the antibiotics used across the world are for preventative animal agriculture rather than to treat diseases in humans. This is used deliberately to support an unnatural, intensive, unsanitary form of animal agriculture.

“But it isn’t just bacteria that are a threat. There are many viruses in wild animals that can jump species into animals kept in markets or intensive farms. They have the potential to mutate and infect humans and the result can be deadly, as we’ve found with coronavirus. Places like Hogwood act as reservoirs of infection and allowing them to continue is like playing Russian roulette.”

Joseph Poore, well-renowned for his recent large-scale research into the environmental impacts of food, added: “The science is pretty unanimous. We just cannot have a future with this volume of animal products in it that is sustainable. It is simply not a feasible option.”

The director and producer of HOGWOOD, Tony Wardle, said:

“I have been producing investigative documentaries for many years and no film has been more harrowing than HOGWOOD. The name ‘a modern horror story’ could not be more apt; there are modern horror stories taking place each day in the British countryside. Not only are these horrors hidden from sight, but they are endorsed and funded by huge corporations and the Government. That is why this film had to be made — because the public has a right to see what takes place beyond the factory farm walls.”

Speaking about the film, Jerome said:

“It is an honour to be presenting this very important film. After seeing the horrendous conditions and animal abuse that is happening behind Hogwood’s walls I had to do something. The pigs of Hogwood aren’t just meat products, they are sensitive, emotionally aware beings just like us and they deserve better than this.”

HOGWOOD: a modern horror story will be available to watch on Amazon Prime Video,
Apple TV and Google Play Movies from 25 June 2020.

HOGWOOD has been selected for the British Documentary Film Festival.