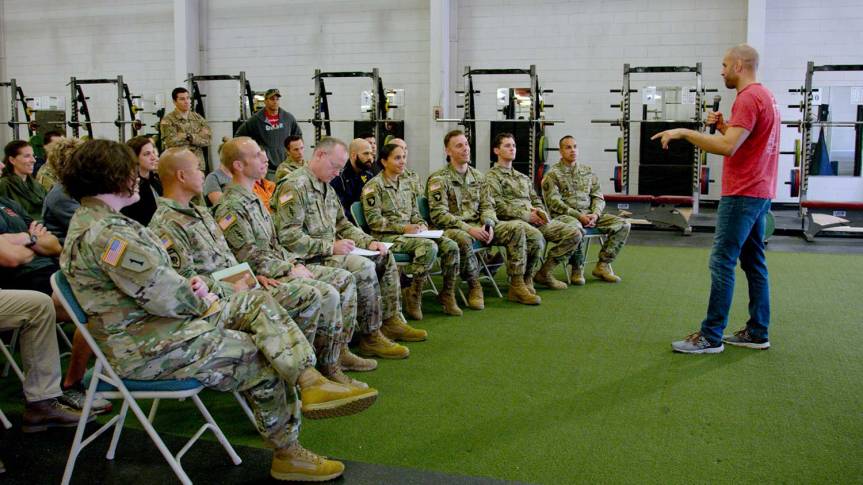 A revolutionary new documentary about meat, protein, and strength.

Where do you get your protein?

When most people think of a plant-based meal, “protein” isn’t the first nutrient that comes to mind. In fact it’s probably the last. And this isn’t by accident.

A Unique Selling Point, or Unique Selling Proposition (USP), is a marketing strategy used by companies to convince consumers to buy their product or service by focusing on a single feature they think differentiates them from the competition. The next step is to repeat this “unique” selling point so often that it becomes virtually synonymous with their product/service.

Nowhere has the USP strategy been more effectively employed than by the animal foods industry, who recognized well over a century ago that their products (meat, eggs and dairy) contain more of certain nutrients, like protein, iron, and calcium, and less of others, like carbohydrates, fiber, vitamin C, folate, and potassium. Since then, these massive food conglomerates have spent literally billions of dollars successfully selling the public on the idea that their products are the best and only reliable source of protein, iron, and calcium, reminding us over and over again that the very building blocks of our bodies — muscles, blood, and bones — are made from them.

At the same time, the animal food conglomerates have also effectively convinced the majority of the population that plant-based foods are low in, or devoid of, these “building block” nutrients, with plants merely playing a supporting role: fiber to help keep us “regular”, with a few vitamins and minerals thrown in for good measure.

Taking all of this into account, it makes perfect sense that animal foods are the centerpiece of most meals, with plant foods reduced to side dishes and garnishes. This is USP marketing strategy at its very best, and plant foods like fruits and vegetables — which receive only a tiny fraction of the government subsidies and marketing/lobbying dollars that the animal foods industry receives — have had no real way to compete.

Thanks to the tireless efforts of researchers, public health organizations, and consumer advocates across the globe, the truth about nutrition is finally starting to reach the public. Including the truth about protein.
The biggest secret that the meat, dairy and egg industries have done their best to keep hidden from the public is one simple concept: animals are just the middlemen, and an ineffective and inefficient one at that. As Dr. James Loomis points out in The Game Changers, “All that protein that you get when you eat a steak or a hamburger, where did it come from? It came from the plants that the cow ate.”

In fact, all protein originates from plants, which also contain all nine essential amino acids we have to get from food. If this wasn’t the case, how would the largest and strongest animals on the planet, including elephants, rhinos, horses, and gorillas — all of which are herbivores — build and maintain such huge amounts of muscle?

Of course humans have different digestive tracts than elephants, but the fact that there is enough protein in the plant kingdom to sustain these massive animals comes as a surprise for most people. As does the fact that, according to the largest study comparing the nutrient intake of people who eat animal products with people who eat only plants, the average plant-eater not only gets enough protein, but 70% more than they need. Even meat-eaters get roughly half of their protein from plants (1).

And yet, if you ask the average person “Where does protein come from?”, their automatic response will almost always be “meat” or some other animal food, even though one big peanut butter sandwich has about as much protein as three ounces of beef, three large eggs, or two large glasses of milk (2).

Despite the animal foods industry’s “unique selling point” (USP) strategy to make us believe that their products are the best and only reliable source of protein (as well as calcium, iron, and other nutrients that also originate in plants), a plant-based diet has its own USP, based not in strategy, but in science: the protein package.

For more on this subject, please go to What About Protein?, Gaining Muscle and Strength, and The Plant Based Advantage.

Can I get enough energy without eating meat or other animal foods?