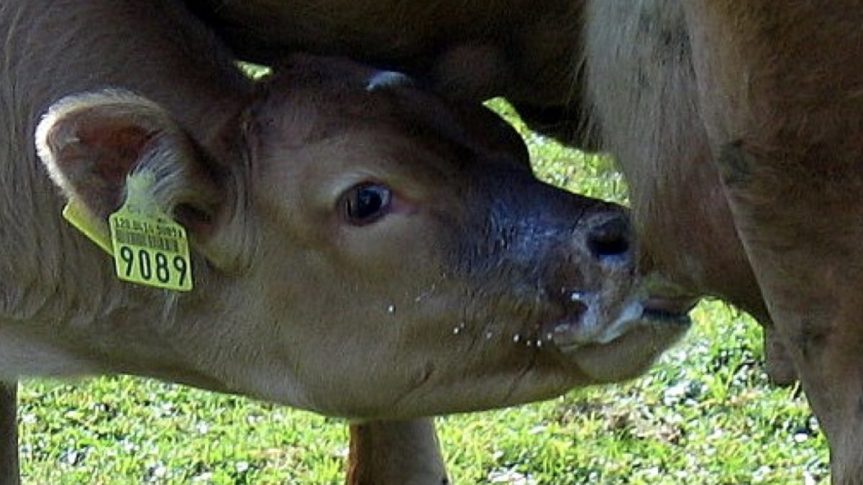 In the new NutritionFacts.org video-of-the-day, I note that the antiseptics used to disinfect cow teats can provide a source of iodine, but have been found to boost the level of pus in the milk of cows with staph-infected udders. Today’s dairy cows endure annual cycles of artificial insemination, pregnancy and birth, and mechanized milking for 10 out of 12 months (including 7 months of their 9-month pregnancies). This excessive metabolic drain overburdens the cows, who are considered “productive” for only two years and are slaughtered for hamburger when their profitability drops, typically around their fourth birthday, a small fraction of their natural lifespan.

Turning dairy cows into milk machines has led to epidemics of so-called “production-related diseases,” such as lameness and mastitis (udder infections), the two leading causes of dairy cow mortality in the United States. We all remember the Humane Society of the United States investigation showing sick and crippled dairy cows being beaten and dragged into the California dairy cow slaughter plant en route to the national school lunch program, triggering the largest meat recall in history. That loss of body condition is a result of the extreme genetic manipulation for unnaturally high milk yields.

Because of the mastitis epidemic in the U.S. dairy herd, the dairy industry continues to demand that American milk retain the highest allowable “somatic cell” concentration in the world. Somatic cell count, according to the industry’s own National Mastitis Council, “reflects the levels of infection and resultant inflammation in the mammary gland of dairy cows,” but somatic cells are not synonymous with pus cells, as has sometimes been misleadingly suggested. Somatic just means “body.” Just as normal human breast milk has somatic cells—mostly non-inflammatory white blood cells and epithelial cells sloughed off from the mammary gland ducts—so does milk from healthy cows. The problem is that many of our cows are not healthy.

According to the USDA, 1 in 6 dairy cows in the United States suffers from clinical mastitis, which is responsible for 1 in 6 dairy cow deaths on U.S. dairy farms. This level of disease is reflected in the concentration of somatic cells in the American milk supply. Somatic cell counts greater than a million per teaspoon are abnormal and “almost always” caused by mastitis. When a cow is infected, greater than 90% of the somatic cells in her milk are neutrophils, the inflammatory immune cells that form pus. The average somatic cell count in U.S. milk per spoonful is 1,120,000.

So how much pus is there in a glass of milk? Not much. A million cells per spoonful sounds like a lot, but pus is really concentrated. According to my calculations* based on USDA data released last month, the average cup of milk in the United States would not be expected to contain more than a single drop of pus.

As the dairy industry points out, the accumulation of pus is a natural part of an animal’s defense system. So pus itself isn’t a bad thing, we just may not want to have it in our mouth.

And you can taste the difference. A study published in the Journal of Dairy Science found that cheese made from high somatic cell count milk had both texture and flavor defects as well as increased clotting time compared to milk conforming to the much more stringent European standards. The U.S. dairy industry, however, insists that there is no food safety risk. If the udders of our factory-farmed dairy cows are inflamed and infected, industry folks say, it doesn’t matter, because we pasteurize—the pus gets cooked. But just as parents may not want to feed their children fecal matter in meat even if it’s irradiated fecal matter, they might not want to feed their children pasteurized pus.

* According to the new USDA data, the American milk supply averages 224,000 somatic cells/ml (based on bulk tank samples taken from whole herds). Subtracting the 200,000 that could be present in nonmastitic milk and subtracting the non-inflammatory fraction (10%) leaves us with 21,600 neutrophils per ml, and multiplying that by the volume of milk in a cup (237ml) comes out to be about 5 million neutrophils per cup. Then it depends on the cellular concentration of pus. Pus usually has more than 10,000 cells/microliter, but “In purulent fluids, leukocyte count is commonly much lower than expected because dead cells or other debris account for much of the turbidity,” and so apparent “pure pus” may have <10,000 cells/microliter. Conservatively using what was described in the medical literature as frank pus (80,000 cells/microliter) and converting from microliters to drop (50 microliter/drop) would mean 4 million cells per drop. Assuming the excess neutrophils drawn to the infected udder are pus-forming, 5 million divided by 4 million equals little more than a single pus-drop per cup (though I guess that could mean as much as 2 or 3 per tall frosty glass).

Source: How much pus is there in milk? | NutritionFacts.org